The ferry was packed with people wearing red and green shirts, chanting slogans, and lighting torches as they exited the boat. Behind the ferry terminal was the biggest crowd I've seen anywhere in Turkey packed between the ferry terminal and the row of restaurants and cafes about 200 meters away. Based upon the colors and the cheering I guessed the crowd was a group of sports fans cheering Karsiyika, the local basketball or soccer club. I was less interested in the reason for the gathering and more interested in a safe passage (an exit strategy so-to-speak) through the crowd. I wasn't being paranoid either. Just several weeks ago a fan had been killed in an after-match scuttle with an opposing team. Sports crowds fueled by alcohol, heat, and shouting have always made me nervous. This was no different. I wanted out of there.

I made my way upstream like a sardine packed upside down in the tin. Eventually the crowd thinned and I made my way to the meeting place to join my friend. We'd just settled into good conversation between bites of food, when I noticed a dull roar approaching from the sea side. My friend stood and walked closer to hear the reason for the crowd and then reported back to me that it was a demonstration to protest the tear gas treatment of the protesters in Istanbul at Taxsim square and to protest the current prime minister and his policies. "The interesting thing about this demonstration," remarked my friend, "is that the groups are all different." There were political parties, anarchists, sports fans from opposing clubs, and families to name a few. She noted that even the extremely leftists radicals were united with some of the other groups to protest "fascism."

I was trying to listen to her while at the same time watching for signs that there could be trouble with this crowd. Most of the people were carrying open bottles and many were talking long slugs from their beer cans or bottles. Several were carrying posters, waving flags or taking pictures and videos. All were chanting. It was nearly impossible to carry on a conversation above the roar of the crowd. In addition, the fact that rival soccer clubs were marching in separate packs but were next to each other in the greater demonstration group spelled trouble with a capital T for me.

Luckily my friend suggested we leave. Unfortunately, I knew there was no way I could even get close to my bike locked against a street lamp pole at the Starbucks next to our cafe. This happened to be the epic-enter of the crowd. We headed the opposite direction and walked away from the demonstrators. After we said our "good-byes" I slowly made my way back to the street where my bike was waiting. The crowd had thinned substantially. In front of the Starbucks about 10 feet from my "parking place" I noticed broken glass lying everyone, upturned tables and chairs pushed to one side in front of Starbucks. Not only that, Starbucks was actually closed. It was very apparent the crowd had lost control directly in front of the store.

When I arrived home I found an email from the US State Department warning of protests in several Turkish cities this weekend and reminding citizens to be vigilant and avoid large crowds. (It would have been nice to get the email earlier.)

I think the protests are in response to Prime Minister's intent to build a large shopping mall in Taksim Square in Istanbul, his recent policy changes regarding alcohol consumption, Syria, reduction of the freedom of expression.... Protesters had been tear gassed earlier in the day. This morning I awoke to numerous Facebook posts in protest..One even went so far as to describe this as a "Turkish Spring." 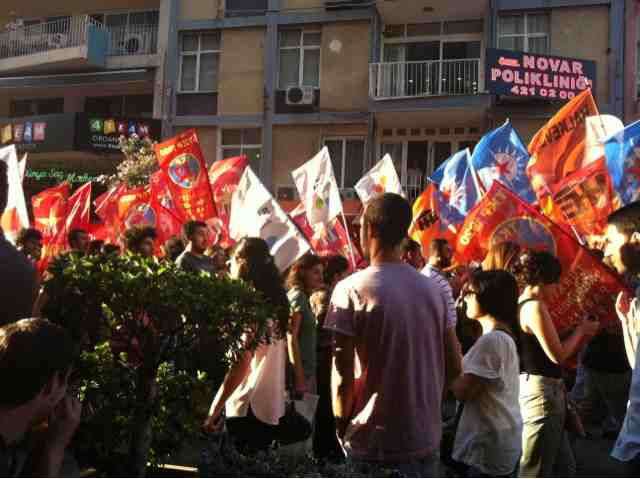