Finding clothes and shoes that fit me has been a constant problem for the past almost-two years. The clothes are generally too tight or cut for a different body type, and the shoes are too small with 7 1/2 often being the largest size. I'd thought  I was the only yabanci (foreigner) trying to fit into a Turkish body type. But, lo and behold, when my German friend, unfamiliar with my clothing woes, asked if I'd like to join her on a trip to her tailor  (she said she had trouble finding clothes that fit) of course, I said yes. Heck, the closest I'd been to a tailor in the States was a watching a man at Men's Warehouse, hem my husband's or son's trousers or take in a suit jacket. This would be "Project Runway" Turkish style.

After driving up and down cobblestone streets we 20 minutes, we finally parking in front of a neighborhood townhouse where a woman was watering her garden. We climbed the steep stairs to her house, exchanged introductions and walked into what appeared to be a framed-in balcony turned sewing room. Two large, industrial sewing machines bearing names I'd never heard of were stationed in front of the garden windows facing the street. Bolts of fabric lined the walls. Industrial sized spools of thread lines shelved above the machines. Burda magazines for inspiration and ideas were stacked on a nearby shelf.

Today's meeting was a "fitting" of some garments tacked together by thread. My friend had bought an assortment of fabrics like men's shirting, lightweight silks and chiffons, ham man towels, and upholstery fabric, and then drawn little designs on fake "Post-it Notes" with dress ideas, blouses, pockets, collars, etc. These two Turkish women had taken those ideas and made them realities..no patterns, just imagination and excellent tailoring skills. During the fitting, we suggested a snip here, and tuck there, and we thought one of the dresses would look good with a "boat neck" collar. My German friend was trying to explain what she wanted. I provided the English term, and the Turkish tailor (seamstress is probably more accurate) used a word like "deniz" which means sea and we all knew we were talking about the same thing.

During the fittings of about 7 pieces, I was thinking to myself that there are actually three universal languages - math, music, and sewing. It was amazing to see how well the three of us communicated about collars, buttons, hem lines, darts, seams, and trim in spite of the actual language difference. Not only that, I was so impressed my friend had solved her "clothes" problem by hiring a tailor. I would never have thought of that. 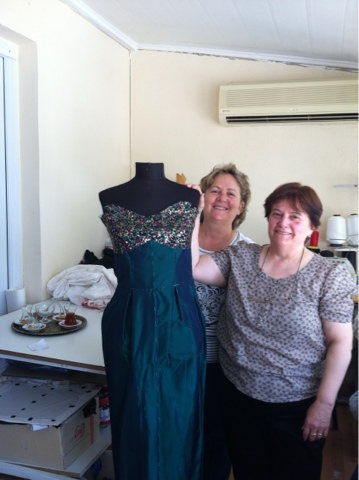