Making a Friend and the Berlin Philharmonic

I arrived in Berlin alone this afternoon after spending a great week in the Czech Republic with Eric. He had to go back to work and I wanted to make the most of my two weeks off so I continued on a  journey to new places. Between naps on the five hour bus ride rom Prague to Berlin,  I'd tried to read most of Rick Steve's Berlin guide to prepare myself for the visit. When he said this is a "big city" and using public transportation is an "absolute must" he wasn't joking. After walking for 1 1/2 hours and not really covering much of anything I decided to postpone heavy sightseeing for tomorrow. I popped into what seemed like the 15th Starbucks on my route for an afternoon cup of joe and free wifi. Although I could probably find a better cup of coffee, the realiable wifi was really what I was seeking.

A quick internet search told my the Berlin Philharmonic was playing tonight at 8:00 p.m. It was now 5:00. I took a quick trip back to my hotel and tried my best to look a little more dressed up. Black boots and black tights are amazing for that. I hopped on the subway and found the beautiful, modern Pottsdam Plaza with the world headquarter of Sony, all the fancy 5 star hotels, and the beautiful Berlin Phil concert hall. I used my best German to find the line for the few remaining tickets and scored a seat.

By now it was less than an hour until concert time and I really needed some food so I found the cafe in the concert hall, bought a pretzel and some salami/proscuitto appetizers and a glass of wine, not very filling but it was the best I could find. I settled in empty table for a light meal and a wait for the concert to begin. I hadn't been there long before several older women approached the table and asked (in German, of course) if they could join me.

Well, you know what happens when several women sit together...we start trying to talk. One asked where I was from. When I replied America she asked if speaking "English" would be better. Yes! I replied. I then asked if she was from Berlin and here is her  (Ulta's) story:

She was born in Berlin and she is one of five children. Near the end of World War the Second (this is how she called it) children were being evacuated to villages away from Berlin. Her mother was afraid that all of her children would be separated so she decided that they would all move to Bavaria to live with a relative. They left Berlin with bascially what they could carry in a suitcase. Ulta found the schooling in Bavaria very backwards and behind in the small village. She was only 8 years old and was attending classes with the 6th - 8th graders. At the end of the war (about 4 months later) the Prussians (her term but I think she meant the people from the region of Bavaria) did not like the Berliners and so they could not stay in Bavaria. They were not given ration cards for food, nor could they attend school. (She was sad that it was Germany against Germany in this situation.) Her mother again loaded them up with one suitcase apiece and their school bags. It took 4 days walking, riding in box cars of trains, riding on the back of coal trucks, and waiting on the side of the roads for whatever rides they could find. They had not heard any word from Berlin for the past 4 months and did not know what they would find when they arrived back in Berlin. At one point there was an airplane with machine guns shooting at them. She had remembered that her father told her to lie flat on the ground so they wouldn't be targets. Luckily all five children and mom arrivedsafely back in Berlin. Unfortunately, they  find their father had not survived.

She went on to be a doctor but she said that experience never leaves her. By then it was time for the concert to begin but it was a very interesting encounter.

In case you're wondering, the concert was fantastic. The conductor looks like he is about 28 years old and has the entire concert hall eating out of his hand.From the first note of Samuel Barber's Adagio from Strings to the end it felt like every musician and audience member was breathing together. Next was Ling Ling  playing Bela Bartok's Piano Concerto No. 2  I didn't know anything about Ling Ling but he, too, is a virtuoso pianist and a show man. Plus, he's young and charming so it seemed to appeal to the younger crowd. The entire orchestra played Richard Strauss' Don Juan op. 20 and Till Eulenspiegels Lustige Streiche op. 28 for the finale. I think there were 15 minutes of clapping and a standing ovation at the end. I've never seen anything like love shown for this orchestra by its patrons. But, they really were that good. 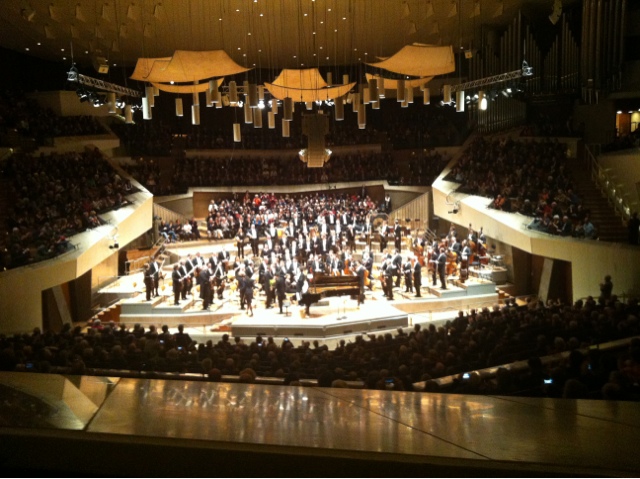