Karşiyaka/Izmir - Kudos for the Improvements

Since I moved here in June 2012,  there have been some noticeable, albeit gradual, improvements and changes to improve the quality of life especially in my neck of the woods. If I could write in Turkish I would even send a note to the City and thank them for the changes, but as my written Turkish is even worse than my spoken Turkish, I'll give a English "shout out" on my blog. 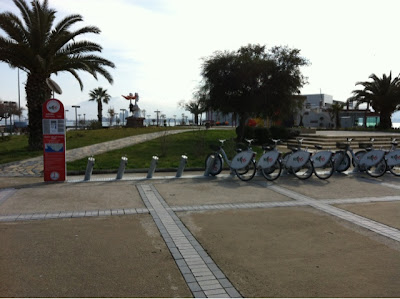 The first positive improvement is the installation of city bike rental areas complete with automated bike check-out systems similar to the automated systems I've used in Washington DC and London. This is very modern for Turkey and very optimistic considering the low percentage of people who actually bikes and/or participate in physical activity and the lack of safe places in which to bike. But, these bikes are a great first step and they really are being used - kind of following the adage "if you  Maybe with bikes will come the addition of bike lanes and driver education...Baby steps... 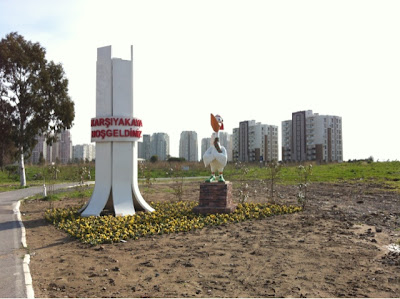 The second noticeable change is the Karşiyaka PR campaign (at least that's what I think it is.) The city has installed these giant cartoon-type birds statues in front of Karşiyaka city landmarks eg: the entrance to the city, the basketball stadium, the wedding salon, to name the ones I saw today. These birds are kind of cute. Perhaps they represent a giant pelican or an African flamingo or a white seagull, or a combination of all three because there are lots of these birds swimming in the bay every day and this statue has features of all three.

Finally, the road in front of my apartment building has just been paved: 4 lanes, plus a landscaped median and handicapped depressions for entering the sidewalk (this is VERY modern for Turkey) It's been over 6 months of construction including paving one lane, digging it back up, paving a different lane, digging it back up, digging trenches, pulling out the sidewalk, putting the sidewalk back in, pulling out the landscaping, putting it back in, etc. Plus, imagine all of this construction with no street lights, no safety tape or markers, no warning signs, etc,  just a kind of "travel at your own risk" environment. You get the picture. It's been both a walking and biking nightmare, not to mention the dirt and dust in the house. But, it's finished (hopefully) and it looks and rides great.

So, it's a big "Thank you!" to Karşiyaka/Izmir for making this a better place to live. I, for one, appreciate your effort. Keep up the good work.

(Just in case I thank the wrong group, here's my understanding of where I live. I think I live in the neighborhood of Mavesehir, in the suburb of Karşiyaka which is in the City of Izmir. I think each suburb has it's own government and builds things like a city recreation center (bird statue holding a basketball) or installs things like bike rental stations (located near various Karşiyaka-city owned- event places like wedding salons and fish restaurants  complete with bird statues in front of them, too)
Posted by Penny Jansen at 6:41 AM