Today I read an article with my Turkish students about Greece's economic crisis. I don't know the date of the article or where it was "copied from" but it was in the "curriculum" so today we read and discussed. I learned a lot of facts from this article and  was probably much more interested than my students because I'd just returned from a weekend jaunt to Chios. Here is a little of what I learned from the article:
- 2 out of 5 people work in tourism and Greece hopes to increase that number to 2 out of 4.
- Greece believes that just selling its islands as a cheap "sun and sand" vacation isn't working. It needs to sell the history and sites as well, which means digging some artifacts out of storage, dusting off some customs officers desks to make island entry quicker, and unlocking the doors to some places that have been closed for the past 400 or more years. 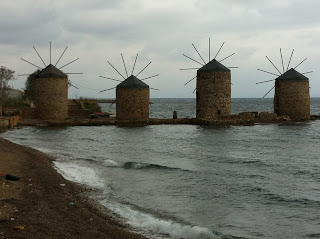 - Greece realizes that they need broaden their market..for example invite their neighbors (notice I didn't say friends) such as Turkish citizens who live nearby and have some disposable income.

That being said, here's what I witnessed during my off season trip across the sea:
- It felt like 4 out of 5 people were working in tourism except they weren't working between 12 and 3 on Saturday and Sunday because it is nap/lunch time..The rest weren't working at all.
- Because it is the off-season we were mainly interested in historical sites. The "sun and sand" would have to wait until next summer. Unfortunately, the historical sites were not well-marked. With 4 people in the car navigating, reading signs, reading maps, and turning on data roaming for GPS we were unable to locate one of the Trip Advisor top 10 sites and the other was so hidden and tucked away up a narrow 4-wheel drive road that we had to park the tiny rental Fiat and walk the remaining 2 kilometers only to find this UNESCO World Heritage Site closed. (austerity measures...maybe?)
- Greece has followed through on their promise to market to Turkey. As a matter of fact the stacks and stacks of tourist information brochures were written only in Turkish. We couldn't find a single English version. But the reality is, of the 15 or so people on the ferry, at least 6 of us were English speakers working in Turkey. Although the hotels are relatively inexpensive and therefore a good buy for the Turks, the food and drinks are at European prices and the currency is the Euro so Turkish citizens are not going to buy anything. Therefor the impact on the Greek economy is may be minimal.

As an active tourist,  here's my advice to Greece:
- Write some brochures in English and keep them on hand at all times. You'll reach a much bigger spending crowd with a few of those puppies on hand. I enjoyed the pictures from the Turkish version but I might have actually shopped if I could read the details.
- Advise your tourism workers that they might want to consider changing their ancient custom of closing at lunch time because when a the once-a-day ferry arrives with weekend tourists at noon and leaves the next day at 4 pm, they've removed lots of possible times for tourists to spend their money.
- Take those brochures, go for a drive around the island, and check for a match of signage to site. You might even add a few signs and post some hours of operation, too.

Even if Greece doesn't take my advice here's what you will like if you visit:
- The people...They smile. They're friendly. They like to party. They like to sing and dance.
- The coffee bars...maybe these are European and I'm just out of touch ..but Greece has the coolest coffee bars, decked out like real bars, and buzzing with atmosphere and fun. 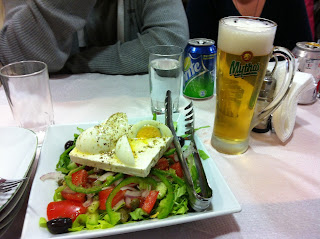 - The scenery...You can't believe how many different types of beaches, mountains, coves, rocks, trees, churches,  monasteries, and vegetation awaits you on each tiny island.
- The food...from the baklava and pastries to the calamari and Greek salads with fresh feta, you'll never go hungry.