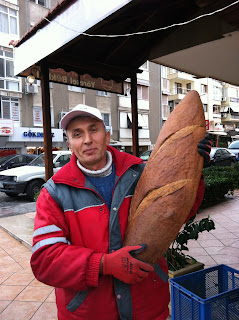 After I was "rejected" from getting a doctor's note today, I took a long walk down random streets. First I saw this man selling chunks of bread from these giants loaves. It looked delicious so I bought a chunk. The size of the loaf is deceiving. Even when I thought I was just buying a little, it ended up weighing 1.58 kilograms. That's like about 3 pounds of bread for a little less than $2.00. Thank goodness I have a freezer and a place to exercise. 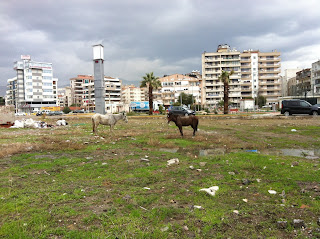 These two horses live in this little field about 1/4 mile from my apartment. I'm sure I saw the white horse running free several weeks ago down the 6 lane divided highway just behind where I was standing to snap this photo. Either he found his way home or his someone brought him back. It would have caused some major injuries had he and a speeding vehicle collided. 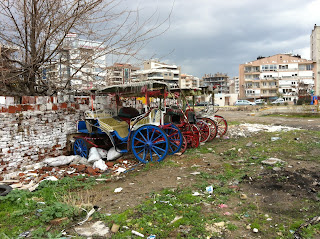 These carriages are in the same field as the horses, separated only by what looks to me like a gypsy shack. 50 years ago, people traveled around Bostanli, the town several kilometers from my apartment with these carriages. It's still possible to ride a carriage through town, kind of like riding through Central Park in NYC and the fee is very minimal, even less than a taxi ride I think. 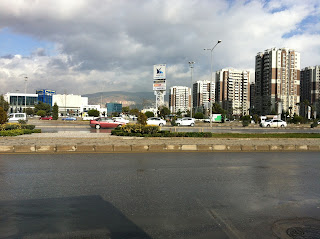 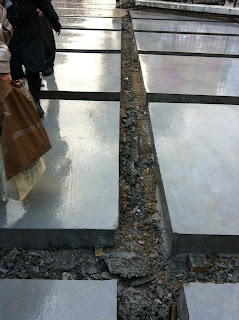 Above is the view of my apartments from the bus stop near my house. Because everyone jaywalks to catch the bus, the city put in a nice gravel path lined with shrubs. We still run across 6 lanes of traffic to catch the bus but what we lack in safety we gain in beauty.

To the right is a picture a a new pedestrian path being constructed on a very busy thoroughfare. What my camera didn't capture is the 12x12 in gap between concrete slabs. I nearly fell in during broad daylight. I wonder who failed to cross the gaps at night?

(On a side note, I think this is a bigger safety concern than my doctor's note, or lack thereof.)