Off the Beaten Track

I had the pleasure of spending a weekend in Istanbul. Having visited many of the mainstream tourist destinations, I decided to spend some time wandering off the beaten path and checking out some of the less touristic/more local museums and neighborhoods. 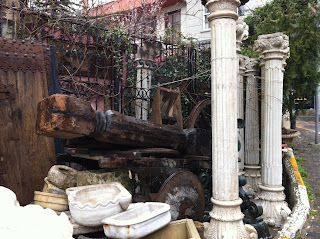 En-route to Istanbul Modern (art museum) I saw signs pointing to the Museum of Innocence. I'd read about this museum and was curious to see it because I'd read the book with the same title by Orhan Pamuk. As typical in Turkey, the signs did not take me directly to the museum but my wanderings took me through some interesting neighborhoods. I found many boutique shops fills with antiques and nostalgia. I always wondered where I could buy an original Roman or Greek pillar (sorry, I don't remember how to tell them apart). They might be a little expensive to ship but they sure would be a nice conversation piece if I had the right garden. 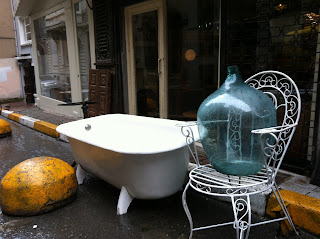 The bathtub caught my attention because, although it didn't have claws for legs, it did remind me of  the tub we had when I was a little girl. 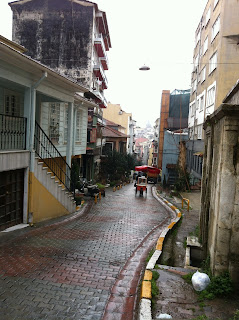 Camera phones (or maybe it's me) are not good at capturing perspective but this is a really steep hill and the man pushing the cart is laboring to reach the top. 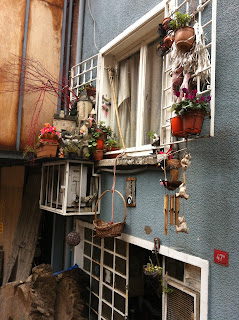 What a clever way to hide the air-conditioning unit (or maybe she's using the unit for a shelf.) In any event her flower garden added a touch of elegance to this rather run-down Turkish neighborhood. 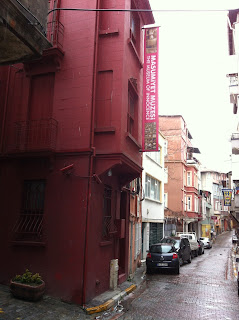 Orhan Pamuke  wrote The Museum of Innocence, a love story, and imagined  a museum of the same name, at the same time. The museum is organized by chapters and each chapter contains items relating to the same chapter in the book. Both the book and the museum give cultural snippets into life in Turkey.