It's Christmas/New Year in Izmir and I feel a few pictures and comments are in order to help me explain how my family and I celebrated "Christmas" along with the Izmirian version of the Turkish New Year.

The Christmas season officially began for me on the first weekend of December when I was in Istanbul at a student conference. We were at Uskudar American High School, an international school decked out with Christmas trees in all the buildings and an organ in their performance hall. I was fascinated by the number of Christmas trees decking the halls and the Christmas books lining the shelves of the library This is a Turkish School after all.

Additional Christmas cheer was added when I taught my 9th graders the "Twelve Days of Christmas." They were super enthusiastic and great participants in learning and singing this song on stage in front of the entire high school.

The arrival of Ellen and Eric signaled more happiness. Eric always comes loaded with good ideas and it was his suggestion that we find a Christmas dinner at a major hotel. The 31st floor of the Hilton for Christmas Eve dinner fit the bill. (Keep in mind,  December 25th is a normal work day here. So there were no activities on Christmas Day.) The view was stunning and the four course, 3 hour long meal was delicious.

I was supposed to work on Christmas Day but thanks to one of our British teachers who had the nerve to ask if all the native speakers (I'm one of those..) we were granted a "day off." Of course, our Turkish counter parts had to cover our classes so treats and many thanks were in order, but I was so grateful to NOT be working. I'm not sure my emotions could have survived working on Christmas Day.

Sightseeing to Pergammon and Bergama, the site of one of the seven original churches of the ancient world and a magnificent well-preserved Roman City were our "presents" for the 25th. We ended the tour of historical sites at one of our favorite restaurants in Bostanli,  called Paprica, where the owner remembered it was Christmas and treated to a lovely appetizer with a candle to make it festive.

On Friday afternoon, the English department hosted the High School New Year's Party. My 9th graders sang and passed out 240 candy canes that Ellen had brought from the USA. Both the singing and the candy canes were big hits.

Last night's outing to Konak brought the surprise of beautiful New Year's Lights illuminating the path along the Aegean Sea and the Clock Tower Square. It was spectacular.

Today's trip to Ephesus followed by a visit to the Virgin Mary's House which was decorated in olive greens, poinsettias, and an elaborate nativity scene was also "Christmas" festive. In case you're wondering, the Virgin Mary's House is supposedly the place where she spent the end of her life. It may or may not be true, but the fact remains that the three of us felt a peacefulness and presence there.

Tonight  as I dropped Ellen and her friend off at the mall and could only find a parking place 2 blocks away, I was reminded of the frantic last hours of Christmas shopping. Not all, but many people in Izmir exchange gifts on New Year Day and, because Monday is a work day, that leaves this weekend for shopping. Life-sized singing toy Santas with their hips shaking and their bellies jiggling were greeting shoppers at numerous store fronts. Toy stores were filled to the brim with games, stuffed animals, and candy. Grocery shoppers were greeted with bins filled with lacy red panties, rows of Lindt chocolate and an Absolute Vodka display promising a free pink, blown glass, music box Christmas tree for purchases of extra large holiday cheer. 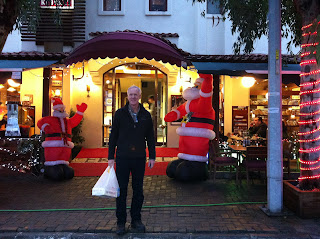 There are a couple of things I don't understand about Christmas in Turkey:
1) Santa - they have displays but I don't think the kids write letters, hang stockings, or understand the difference between naughty and nice. They can however buy little Santa suits and dress up like Santa....kind of like a Halloween costume.


2) Christmas trees - They have them everywhere and they call them "Christmas trees" but I don't think they associate Christmas with Christ...although they do believe Jesus was a prophet like Mohammed...just not the last or most important prophet.
3) Their love of Christmas music, secular and religious. Michael Bubble's Christmas album (Thank God they have good taste) has been playing in the hallway of our school every day for the past two weeks.


4) Wrapping Paper or Gift boxes - or the lack thereof..I cant' find any anywhere...

So as I sit here reflecting on the past week of Christmas, sure I had to work 4 out of 5 days. Yes, I miss my family terribly. No, it's not the same as Christmas in America. But, yes, I can say I survived, with most emotions in tact and with the balance on the scale tipping towards the positive.