Over the mountains and to the sea...

Thank goodness I have a teacher friend who looks out for me and invites me to fun outings. Today we were lucky enough to join a great hike with a club from Izmir. In typical Turkish fashion I started out needing a dose of patience because there were 5 different  pick-up points, the last of which was about 10 minutes from my house so I could have slept in for another hour...But...the rest of the day was worth it.

I took many pictures so hopefully they will give the gist. There were over 70 of us on the hike so we looked like a ribbon of walkers at the beginning as we strolled though olive orchards, past fig trees, and  underneath pomegranate trees. Our first stop was at a small village where the Sunday bazaar of fresh produce and home baked village bread was tempting us to load up our packs. My friend and I settled for a nice tree-ripen pear before joining our group at the local tea/coffee garden. A special treat awaited us there. Across from the garden a man was making small, fresh, piping hot homemade donuts. It was explained to me that they make these donuts when someone dies and the family passes out free donuts until they run out. What an opportunity! And, God rest his soul...But, these were the best donuts I've ever eaten. They were so good, and I'm sure I'll never find this village again, so I helped myself to a second.

With the donut I enjoyed my first cup of dibek coffee..it's like Turkish coffee only I think I like it even better. On the saucer coffee was a delicious piece of homemade lemon locum that complimented the coffee perfectly. Staring me in the face while I was eating my donuts and sipping my coffee was a tray of just baked village bread. I'm a big bread fan and couldn't resist, so I walked inside and paid my 4 tl. What I didn't realize is that this loaf felt like a 2 kilogram loaf. (That's 4.4 pounds I added to my pack.) And, you're probably thinking how can I ever eat a 2 kg loaf of bread. Well, my friend mentioned that it freezes well...so I was....sold.

We continued our journey up and down steep hills, through brambles, across slippery lose rocks, underneath tree branches, and finally to the top of a fire lookout station. This gave a really good 360 degree view of the coastline and the valley behind us. The lookout station was equipped with two beds, a small tv, running water, and a brick oven outside. And, I think I got a glimpse of the fire ranger on the roof of the hut.

All along the path were wild strawberries, but not like the wild strawberries I know from the US. These were round and had prickly fuzz on the outside. The flavor was good but the text was difficult for me to really appreciate...but I think one women ate at least a kilo.

We concluded our walk at the Foca Teacher's House (every town has these "houses" which are kind of like fancy YMCA's for inexpensive hotels and meals.) There we feasted on fresh fried sardines and mixed salad. The sardines were remarkably tasty and especially palatable to me because the heads were already removed. Luckily the friend I was with showed me how to eat them with her fingers and left the bones and tails on the plate. (Sometimes they eat everything but again, I just don't like the texture of bones and tails so I was very happy.)

After a filling meal we changed into bathing suits and dived into the Aegean Sea for a delightful end of season swim. The water was crystal clear, the small fish were enjoying our company, and the men were showing off with diving competitions from the dock.

I'm at home now...sipping a glass of wine and eating bread and butter before bed. I will probably be sore but good reminders of a great day. 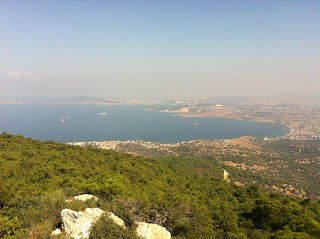