Portraits and the Pera Museum

Today I visited my first art museum in Istanbul, the Pera Museum. It currently houses an exhibit of childrens' portraits from the14th, 15th and 16th centuries. Most of the portraits are European: Italian, Spanish, English, Northern Germany, etc. Of course, most of the children were royalty because, let's face it. Who else could afford to hire an artist?
I loved this exhibit because it really got my imagination going. For example some of the little boys were holding whips so they could whip their toy horses. From the expressions on their faces I'm guessing they tested their whips out on other things too. Their faces has the mischievous grins of rambunctious boys who fear no reprisal or discipline. Of course their little silk ballet slippers and sashes on their knickers would give most boys cause to want to whip something.
Many of the girls held little baskets of fruit, especially cherries. The symbolism is just what you would think , purity and virtue. Their portraits were then shipped to lands far, far and away to arrange marriages and allies between two countries. Some of the painters took artistic license to make the girls more beautiful than they actually were. Even with paint and artistic license , some of these girls could stop a ten day clock. Although perhaps they did eventually turn into swans, some of the countries may have been better off to forego the alliances in order to have cuter offspring.
In Several paintings, children held silver rattles with a boars tusk fixed to one end. Gnawing on the boar's tusk was supposed to help with teething. We probably don't use these toys today because 1) the cost of silver is too high 2) the boar's tusk could poke out an eye or make a 2 inch deep gash, and 3) boars might be an endangered species. But in those days one of these rattles was a real indication of power and wealth.
I especially enjoyed seeing Queen Isabella of Spain before she was actually queen. She was a rather pretty preteen looking askance at the future king Charles who was hanging on the opposite wall. Charles was a rather skinny, scrawny looking middle school boy oblivious to Isabella's advances that I imagine went something like this, " hey Charles! When we grow up you're going to marry me and were going to get your friend Columbus to discover a new country called America. What do you think of that?" And Charles replied something like this, "Huh? " while riding his toy horses and giving it an occasional whack with his whip.
Ok, so now before you think I've gone bonkers with my imagination, I want to assure you that I loved this exhibit. It made me smile and think.
On a side note, the Pera Cafe houses a piano that has traveled across many lands and seas. It's story was the inspiration for the book and later movie calked "The Piano" which I've seen and enjoyed. 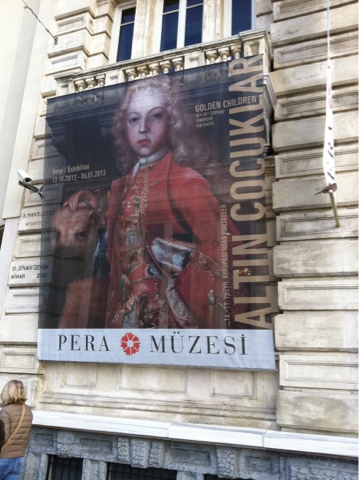